I am using kong since one month now in kubernetes cluster with ingress-controller.

I upgraded yesterday to last kong version (1.4) and the memory usage grow constantly even if the rps on APIs stay low ( less than 1rps).

Could it come from the last kong version ?

I deployed kong with helm and I don’t specify any limits nor requests, I want first to determine the average consumption of kong in my cluster.

I am using some plugins:

I also had similar experience with kong latest version. We also had a similar setup we are running on kubernetes cluster with latest ingress-controller. Also we have following plugin enabled 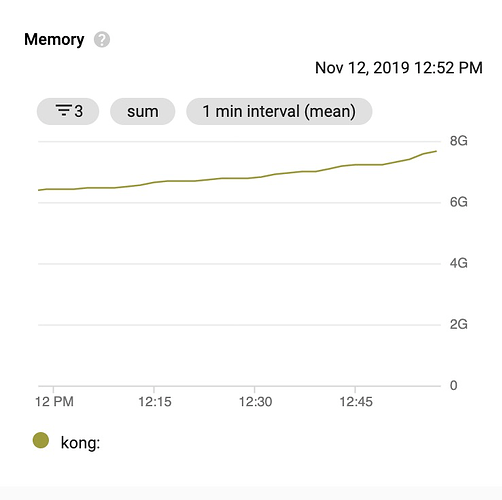 I downgraded kong to my previous version (1.3) and the memory usage come back to normal (average 100mo used ) . I presume that there is an memory leak in the 1.4 versions … I am waiting a fix before reupgrade

Just wondering which ingress controller are you using with kong 1.3 ?

Hi @samsja,
Did you try to set memory limits? i had the same issue with 1.4 version and after setting them, it seems that Kong realizes about the container resources limits and it’s able to clean memory.
Without that, the memory increased without control

I have’nt put any limits nor request yet because kong in still in test in our infra, but kong 1.3 work great without those control, they were no abnormal behaviour.

I have also tried with Kong 1.3 and it’s true that memory consumption is more under control but we had lot of “no-memory” issues (https://github.com/Kong/lua-resty-worker-events/issues/19) and services got no available.